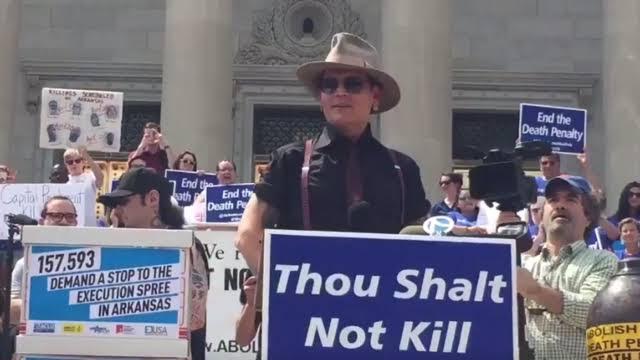 As stated on my seventh blog post, Arkansas is getting ready to execute eight death row inmates in ten days because the pharmacology to kill them is going to expire. These executions are going to occur at the end of April.

Johnny Depp joined several former death row inmates in protest of these scheduled executions in Arkansas. He spoke before signs that said “Thou Shalt Not Kill,” and “End The Death Penalty.”

Amnesty International says, “If Arkansas goes forward with #8in10Executions, it will be a blot on Arkansas and America.”

Arkansa Governor Hutchinson of Arkansas has a laissez-faire attitude about the situation that only he can change. Or the voters can vote him out after his first term in office. It’s as if an “eye for an eye” and not “thou shall not kill” along with “love one another” is the mantra of so-called Christians in Arkansas and America.

What happened to the message of love and nonviolence of Jesus Christ, Pope Francis, Dorothy  Day and Mother Theresa? This is Holy Week, after all. That goes for you, @realDonaldTrump, as you continue to drop bombs on innocent people.

Damien Echols credits Johnny Depp for saving his life. Here they are both making their case against the death penalty.

One thought on “That Shalt Not Kill”